SonicWall NSA 2650 & the SonicWave Series shook up the cyber security scene, painting the tail-end of September with excitement over new features and capabilities. What exactly sets apart the NSA 2650 from past iterations? And what is a SonicWave anyway? Answers to all your questions regarding the latest tech buzz are here.

The SonicWall NSA 2650 is the latest Next-Generation Firewall offering from SonicWall and it comes with a slew of handy features. The NSA 2650 boasts high port density, allowing for a huge amount of simultaneous connections without sacrificing performance or requiring network switches. Pair that with multiple high-speed processors with parallel processing power and you’ll find that the NSA 2650 excels at SSL Deep Packet Inspection that doesn’t slow your traffic. SonicWall’s patent for reassembly-free DPI translates into negligible downtime in data packets waiting to be inspected. Instead, packets in queue are moved right along to the next available processing engine and ushered through the express lane.

Finally, one of the most exciting aspects of the SonicWall NSA 2650 is its ability to support 802.11ac Wave 2 Wifi. Wave 2 is the next step in wireless internet technology and soon to become the new standard in Wi-Fi. The throughput capabilities of the NSA 2650 hardware are revved up high enough to match the requirements of Wave 2 Wi-Fi, so you’ll have a firewall finally fast enough to keep up with the blazing speeds of your wireless network.

Multi-gigabit ports, several high-speed processors, and hearty onboard memory all translate to one thing: speed. All of this on a tag team with Wave 2 compatibility means that the NSA 2650 can provide best-in-the-business performance stats while maintaining cutting-edge security. The SonicWall NSA 2650 is also ready to scale with your business thanks to optional expansion slots, redundant power supply options, and more gigabit ports than you could realistically need.

What’s in it for me?

You know that tiny little area at the center of the Venn diagram where “fast,” “powerful,” and “versatile” meet? This is the domain of the SonicWall NSA 2650. Advances in wireless technology are crystallizing into the emergence of new industry standards. Get out ahead of the changes and you’ll enjoy fast, secure, future-proof network security that is built to grow with your needs. 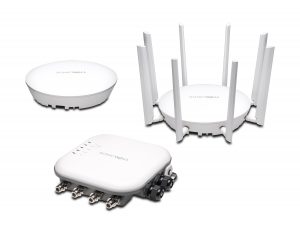 The SonicWave series is a line of powerful Wave 2 wireless access points. More powerful than even the famous SonicPoint, the SonicWave access points are multi-radio devices built to operate on Wave 2 Wi-Fi. Operating on the 802.11ac Wave 2 network means you’ll be onboard with an emergent industry standard in wireless technology. SonicWave devices are capable of both band steering and beamforming, fancy terms that mean your network is always operating on the most efficient frequencies available.

SonicWave access points are multi-radio devices. A primary radio operates on the 5Ghz frequency band, which is often the least “crowded” frequency. This ensures that your connection isn’t battling for priority. A second radio operates on the classic 2.4 GHz band so that legacy 802.11a/b/g/n Wi-Fi devices can connect. A third radio exclusively scans for rogue access points, providing top-of-the-line security and, as a convenient bonus, Purchase Card Industry (PCI) Compliance.

Not to beat a dead horse here, but 802.11ac Wave 2 is truly the next evolution in wireless networking and the SonicWall SonicWave is the first step towards standardizing the wireless industry. If you’re ready right now for fast, secure, uninterrupted wireless coverage, Wave 2 is your destination. If you’re afraid of change, then we’ll catch you in a few years when you jump on the Wave 2 train anyway.

What’s in it for me?

These access points allow you to utilize HD media, cloud, and mobile-heavy resources without degrading signal strength. You’ll be hard pressed to find anything that can slow this wireless network down. If you want a real work horse handling your web traffic, the SonicWall SonicWave is your answer. SonicWaves are simultaneously impenetrable security juggernauts and nimble network acrobats, transferring across multiple frequency bands to ensure that your web traffic always has the most secure, direct, and unobstructed traffic flow.